I’m jumping about in time a bit, here. From 1976 to 1979 in a single bound. I will get back to the years in between, but I can’t wait to publish these letters. They’re from my dad and other family, sent to me on an almost weekly basis in my first year at Reading University. From what I remember, there was often some money accompanying the letter – a tenner here, a fiver there – and nearly always a daft letter. Dad, John, died less than a year later at the stupidly young age of 39, and I’ve somehow managed to repress my memories of him – self-protection and messed up mind – but the rediscovery of the letters in an old suitcase made me realize what a sharp sense of humour he had (and where I might have got it from).

The offending car was mum and dad’s Ford Escort Mark I, this one, parked opposite Christ Church:

Before university, and during a university break or two, I worked at Marks & Spencer’s on Oxford St on Thursday evenings and on Saturdays. I usually travelled there on public transport, which took forever….a 277 to Mile End, and then to Oxford Circus on the Central Line. On this occasion I took the car, and happily parked it on a yellow line on Great Marlborough St, behind the M&S shop. Six whole quid, the fine.

And the East London Advertiser….I’d forgotten that he sent that almost weekly. I really enjoyed hearing news from home, and remember fellow students and I sitting around in someone’s room reading from our respective local papers. Cardiff Women Institute’s new knitting machine didn’t have a patch on the murder and mayhem in the East End.

Dad was a shift worker at Watney’s Albion Brewery in Whitechapel.  “Early Turn” meant he was working from something like 5 am to 2 pm. Although he’d driven me to university in the weekend before the start of term, there was still some personal stuff for him to bring (I had no idea what living away from home, or university, meant, so I didn’t really take enough in the first instance). 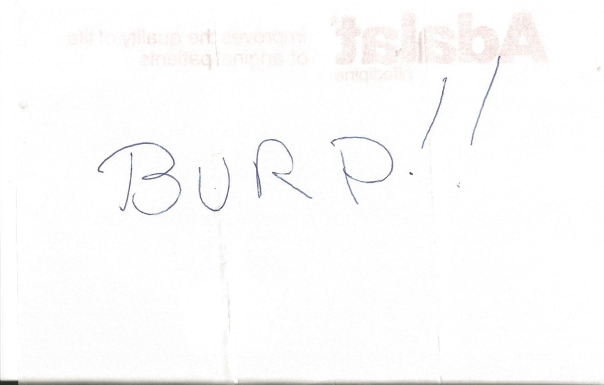 Love the hair dye reference. Well, I did look like this, then….

This one’s a bit odd, written on the notepaper for some medicine or other.  My mum was working for a dodgy Stepney GP at the time, must have borrowed it from him.

Joker. The 1980 FA Cup Final was between Arsenal (my team, my dad’s team) and West Ham. West Ham won 1-0, but I don’t remember much of the match due to an excessive consumption of vodka and orange.

Sister Karen wrote too, in reference to my messiness whenever I was back on the Island (this letter on the back of an envelope still scares me).

And then he was gone 😦

Follow Growing up on the Isle of Dogs on WordPress.com